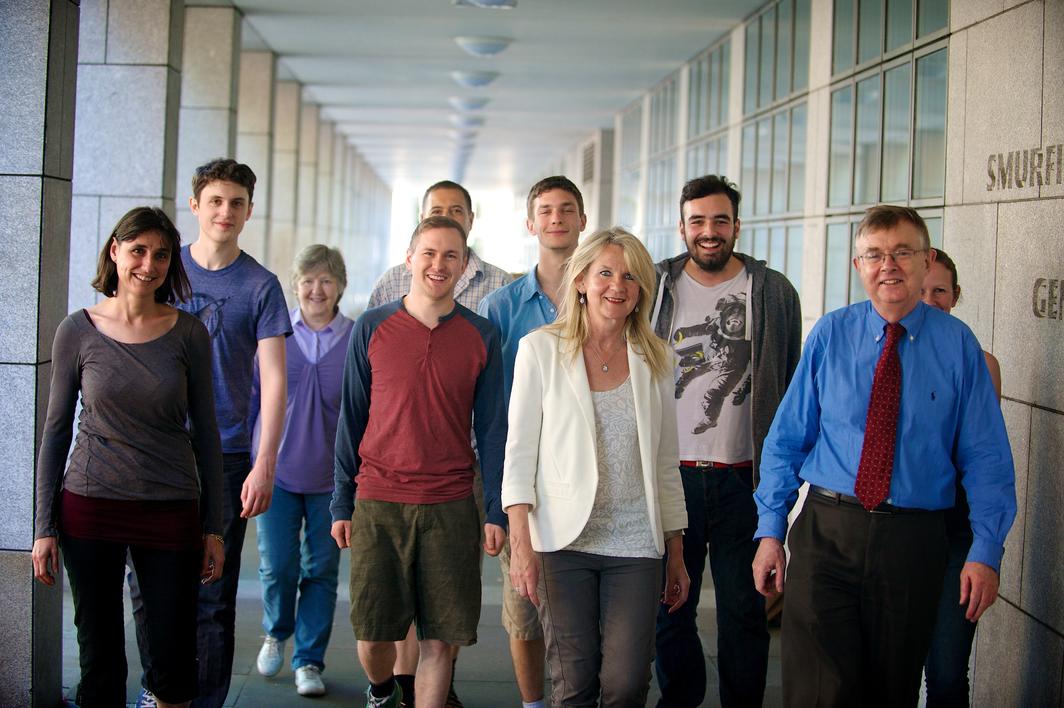 Commencing in 2016, this 3-year project is co-funded by Fighting Blindness and the Health Research Board (HRB) under the MRCG-HRB co-funding scheme. It falls under the Target 5000 Programme and is at present where all initial and research-grade genetic testing takes place. We spoke to Prof. Jane Farrar to find out more.

What attracted you to retinal research?

Genetics has had a magnetic attraction for me since school days studying biology. It seemed powerful to understand the vital code determining the building blocks for every cell in the human body – the DNA code.  That knowledge should unlock potent and imaginative ways to fix parts of the code with mistakes, which is the case in inherited diseases.  Today that is exactly what is happening for retinal disorders such as RP and many other disorders too!

The beginning of my PhD studies marked the start of retinal research in Trinity College as a small initial study with Prof David McConnell and Dr Jane Maloney (Eye and Ear Hospital) and soon after growing rapidly in Prof Peter Humphries’ laboratory, with Dr Paul Kenna in the Eye and Ear Hospital.  It now involves more than 40 researchers in many teams in TCD in conjunction with an extensive nationwide network.  The eye has about 100 million cells that can detect light, the photoreceptors – the signals from these amazing cells travel down the optic nerve and are interpreted in our brain; that is how we see images.  At the start of the research we traced Irish families with retinal disorders which was caused by photoreceptor cells not working properly and gradually dying.  We realized that if we searched the DNA code present in these families we could find the mistake in that code that resulted in the photoreceptor cells malfunctioning.  At that point we were totally hooked by retinal research, we knew we could use Irish families to uncover really important information for patients globally with these diseases.  That is what attracted us to this field – genetic and retinal research is addictive, a bit like a shot of heroin!  In some of those large families with retinal degenerations we did find the disease-causing gene.  We did not have the rapid DNA sequencing (decoding) methods we have now; it was extremely laborious, like finding a needle in haystack.  We were hunting for the disease gene in the 3 billion letters of DNA code which is like a book with a million pages!  This early information stimulated retinal research globally and we now know that more than 300 different genes can cause these eye disorders.

What keeps us still enjoying and optimistic about ocular research is that the technologies we use are changing rapidly, and each year it is possible to understand this important group of eye disorders in much greater depth.  This is beautifully exemplified by human genome sequencing itself – decoding the DNA code.  It took multiple institutes many years and about $2-3 billion to generate the first human genome sequence – the first copy of the 3 billion letters of DNA code.  We can now rapidly sequence a human genome for less than $1,000 – more than a million-fold drop in price in 15 years!  It is this rapid pace of development that makes the field addictive and keeps us looking towards what will be possible next year.  We know that the next 5-10 years will be even more exciting and there will be a greater focus on effective therapies for these important eye diseases, now that we have established many of their causes from genome sequencing.

Within the next five years, where do you expect great advances to be made in vision research?

There are so many areas in which great advances will undoubtedly be made in vision research over the next 5-10 years – let’s just touch on a few of them – it is an extremely exciting time for the field.  The DNA sequencing referred to above, allows us to understand the cause of an inherited disease – what genetic (DNA) mistake in a given patient is resulting in a retinal degeneration. This is one of the primary goals of the T5000 project.  Such information not only provides accurate diagnoses for patients but enables novel therapies to be designed which target the specific problem and therefore should be very potent and effective.  Gene therapy can be used to supply a ‘correct’ copy of the part of the DNA (or gene) that has a mistake in it.  The DNA with the mistake remains in the cell and simply an extra copy with the correct code is supplied.  The first of these novel gene therapies, Luxturna for one form of retinal degeneration, RPE65-based disease, was approved in the US in Dec 2017 and in Europe in Nov 2018.  In the next 5 years a significant number of gene therapies for other forms of IRD will successfully complete clinical trials and will be approved in the US and Europe.  This is something that we simply would not have been able to say a few years ago but now we can state with a large degree of certainty.

Adding a piece of DNA which corrects the genetic defect is one strategy for gene therapy.  However, what about correcting the DNA code itself, just like editing a document with a typo!  The human genome, the document with a million pages, is inside every cell.  Are there ways to correct the typo in the DNA code in a retinal cell so that the cell has all of the perfect instructions allowing it to function well?  There is a new technology called genome editing that allows us to do just that!  Genome editing is big news and has made headlines in Time magazine, BBC, CNN and global networks.  Research teams are now trying to correct the mistakes that cause retinal degenerations; these approaches are not being tested in patients as yet but in cells in research labs.  Some genome editing therapies for eye disorders will very likely be in clinical trial in the next 5 years.  Finding the one letter of DNA code that is incorrect in a million pages of code and then correcting it in retinal cells is a mind-blowing task!  It is becoming possible with genome editing – we would not have predicted this a few years ago.

One thing that is fascinating about retinal cells, and in particular photoreceptor cells, is that they are sensitive to light – they can detect the light that enters your eye.  As mentioned above, this light energy is rapidly detected by photoreceptors and passes this signal to other cells that are in the retina and eventually down the optic nerve to our brains where the signal is interpreted as an image.  This is all happening so rapidly in our retinas and brains and that is why we can see images in front of us and detect them in real time as they move.  Patients with severe forms of retinal degeneration who have had symptoms of the disease for some years may have lost all of these light sensitive photoreceptor cells.  In these cases there are no photoreceptors left to rescue with either gene therapy or with genome editing, the two exciting technologies discussed above.  While photoreceptors may have all been lost in such patients, some of the other retinal cells present still remain.  These other types of retinal cells (retinal ganglion cells, among others) cannot detect light at all.  However, what if we could alter these remaining retinal cells in severely affected patients so that they gained new functions and were able to detect light?  Could these cells act as ‘substitute photoreceptors’ and would they send a signal down the optic nerve that would be interpreted as an image by our brains?  Lots of research has been undertaken on adding such new ‘light detectors’ to the retinal cells – the technology is called optogenetics.  The first clinical trials for optogenetic therapies are underway; this is an exciting new therapeutic strategy and one which will be developed a great deal more over the next 5 years leading to new therapies for retinal degenerations.

Another area that is expanding rapidly and will bring enormous advances over the next 5 years is our understanding of what actually happens in a retinal cell that is not functioning properly.  In cells that are dysfunctional or sick, irrespective of the actual cause, that is, irrespective of which disease gene is driving the retinal disease, the effect on retinal cells can be similar.  If we can understand the negative pathways that are stimulated in sick retinal cells, we may be able to block these pathways and slow the disease down or indeed halt further disease progression.  What is really exciting about this approach is that we may be able to develop therapies that are relevant not only to one specific form of retinal disorder (as is the case with Luxturna), but instead may be relevant to many different retinal disorders – a single therapy with utility for many retinal degenerations.  In addition, we are discovering that the disease pathways present in the rare inherited retinal degenerations are at times similar to those active in common forms of retinal disorders such as age-related macular degeneration (AMD).  So, some therapeutic strategies may be relevant to many different retinal disorders.  There are many research teams including our own undertaking studies on these powerful, more generic therapeutic approaches and, without doubt, some novel therapies will emerge over the next 5 years.

A large number of other exciting and novel technologies are being developed right now in vision research but there is not enough space to talk about them here!  This is just a snapshot of some amazing and exciting developments.  I have never felt more optimistic about the real possibilities of therapies for retinal disorders.

What are your other interests (outside of retinal research)?

I share our pretty crazy home with my husband John, three kids and three dogs!  I love theatre, poetry, music and reading both fiction and non-fiction.  I feel extremely lucky to live beside the beach and find walking or running beside the water so peaceful – the colours and sounds of the beach are different every day.  I swam until the end of September this year and had planned to try to keep it going for the winter – next year!